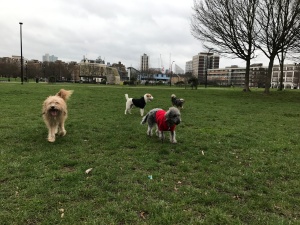 Of course, if you hang out in my endz you will no doubt, at some point, find yourself in Shoreditch Park. We have lots of happy stories from Shoreditch Park. And we have made lots of wonderful friends there too.

The park is an important place. It is where we can gather with dogs and people from all walks of life (see what I did there!?). We meet big dogs, little dogs, fast dogs, slow dogs, ball dogs, chasing dogs … and we have lots and lots of zoomies. 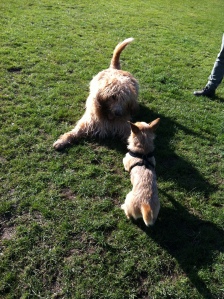 Shoreditch Park is not the biggest of our parks, but it is still a great park. It is 19 acres (7.7 hectares) which is not quite big enough for Aubrey Beardsley to reach full speed. But he says it will do. It is an off-leash park, but not really off-leash for dogs that don’t come back, because it is open to the road in a lot of different places (to encourage people to use the park, not to encourage dogs to leave their walk and go home on a bus instead).

Of course, it wasn’t always a park. Shoreditch Park started out as fields, but then they built some houses for the people who were building Regent’s Canal. And then WWII came, and a lot of the area was destroyed during the Blitz and air raids between 1940 and 1941. So they built some temporary homes to house everybody and these stayed up for a very long time, almost 20 years. But then in the 1960s and 1970s they pulled those down and started tidying up the whole area, including making what was to become Shoreditch Park. A lot of the old streets then disappeared, but they have put some big granite seats in place with their names. Which is nice. And they have restored the old 1860s lamp standards, to help remember where the old streets. I like that the park remembers how it used to be. And every time we visit, we add memories as well … on all our favourite trees and rocks. 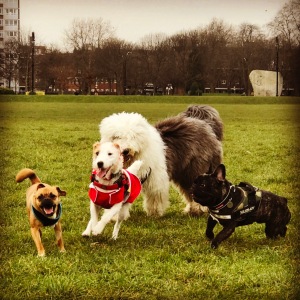 The history of the park is so interesting that in 2006 they did a special episode of Time Team, with host Tony Robinson. You might remember him from my Dogglebox episode about Coast to Coast. He also used to do a little show called Blackadder. Anyway, archaeologists from the Museum of London did some digging (some of my pals had probably got it started for them though) and they looked at lots of things, and all the houses and bombing damage. And they found lots of wonderful things, like 16th century stoneware! And a pair of 1950s nylon stockings (obviously Jeff and I hadn’t found them first … ). They even found children’s toys. And all the local people got involved in the dig, so that was very nice. And it is just like Shoreditch Park every day! It is a very sociable place. And there is nothing better than finding a great spot and doing a group dig.

And now Shoreditch Park has lots of new facilities. There’s almost something for everyone.

There are tennis courts (which some people use for young pups starting their off-lead training). They can also be used for tennis, although I don’t think we’ve ever seen that. 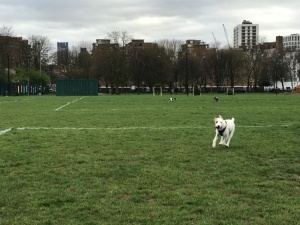 And there are big fields for sports, more usually for zoomies. Fortunately for dogs, football is seasonal. But sometimes, during the season, there is so much football that they play in the bottom park as well (which is smaller and full of picnics and dogs). One time, we got to the park and we were all playing and then I saw the ball and ran onto the game and then just stood there. I don’t like to chase the ball. I just like everyone to know that I know where it is. I then ran out of the game again and went on my way. This confused all the players. But it gave them a laugh. As far as Aubrey and Huw are concerned, however, any large ball in the park is to be treated with utmost suspicion and avoided at all costs. 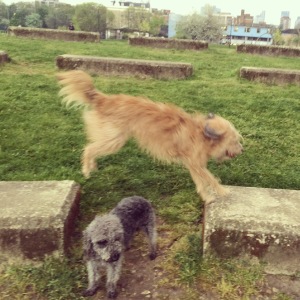 Aubrey and Huw at the amphitheatre

And there is an ampitheatre. Well, it is some concrete blocks to sit on, which Aubrey thinks make an excellent stage for a dynamic rock on! Huw and Aubrey have done some great tricks on the rocks. And sometimes we just sit with pals on the rocks. More often than not we pick up and leave messages at the rocks. It’s like commenting on a post, except that it’s a rock, not a post.

And there is a small sandy bit, which we love to jump up on and down again. Someone has to stand on the sandy bit, and someone has to zoom up and down around them. You can’t imagine how many times this can be fun. But sometimes humans use it to play games. Again, they use balls, but they don’t bounce, and they weigh more than Jeff. The game is called boules, 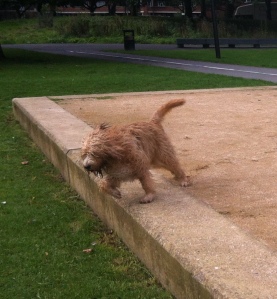 Finnegan and fun in the boule pit

because really heavy balls are called boules. But the weight didn’t stop our super pal, Alfred, trying to grab one once. It was the boule that is called the piglet, Jack. But it doesn’t squeak, like our pig at home. So no-one else could understand the attraction.

And there is a boulder which is also a sculpture. It is one half of Boulder by a man called John Frankland. The other half is in Mabley Green. And they were launched at the Shoreditch Festival in 2008. I think it the kind of installation that invites participation from the public. So we oblige … 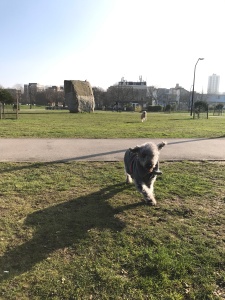 People use it for rock climbing, and we use for sniffing and peeing. Well, climbing is fair enough, but we are the ones that have given it its special meaning for dogs everywhere. We are the ones that get the boulder to speak! We are a very creative bunch in Shoreditch.

There is also a giant film reel, which is called Hitchcock’s Reel, by a man called John Edwards. Hitchcock used to film at Gainsborough Studios (and you can see the original site behind us in some photos, on the building called the Gainsborough).

There is also a beach volleyball court, the only one in London. It is in the dog-free children’s playground so, except when they leave the gate open (which is basically all the time), I don’t know any dogs that know much about it. It is a mystical, sandy enigma. 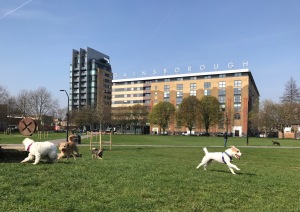 There’s even a wildflower meadow, which is great for the insects and birds.

We like to greet people in the park, if we are invited. But we don’t usually greet the rock climbers though. There are exceptions, but for the most part they do not interact like regular human beings. So we avoid them. And they are always very, very worried about their sandwiches. Even though we would never take a sandwich from a stranger, especially not a rock climber. Not even a cheese one. 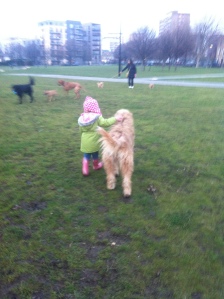 And beside the park there is a fitness centre (where some squirrels live, just ask almost every single one of my pals), and a primary school. Finnegan used to love the school. Apparently, if they all went to the park when school came out he would love to greet the kids (only the ones who wanted to talk to him though, he was an understanding fellow). This basically involved standing there, just a little way from the gate, while the kids would walk past and stop and give him a hug. He said he couldn’t stop in the park without saying hello! That would have been most impolite.

And what is the park if not a place for saying hello!? 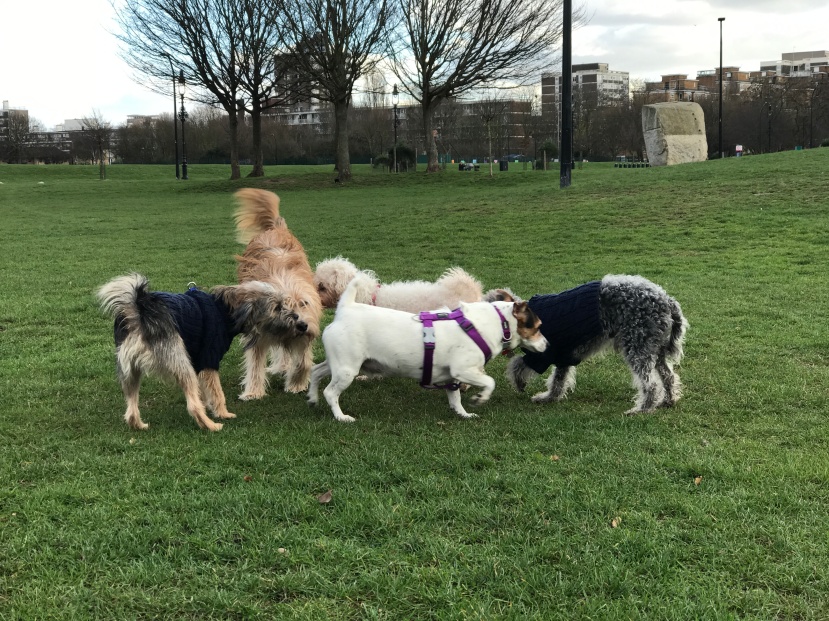