The Dog With No Name 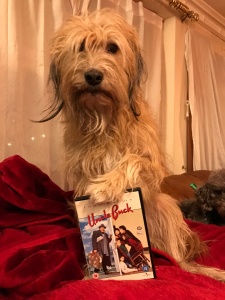 It seems I cannot get enough of John Hughes films because here is another one, Uncle Buck. This film has become a cult favourite and I think it might be one of John Candy’s best ever, except maybe for Cool Runnings.

Buck is a 40 year old, drinking, smoking, gambling, unemployed bachelor who lives in Chicago. Buck’s brother, Bob, and his wife, Cindy, together with their three children have recently moved from Indianapolis to the suburbs of Chicago after the respectable Bob received a promotion at work. This move is a big point of conflict with their oldest child, the rebellious teenager, Tia. Early in the film, Cindy’s aunt calls in the middle of the night to let them know that Cindy’s father has a heart attack. They have to drive back to Indianapolis immediately to be with him, but there is no-one to mind the children. Much to Cindy’s despair and adding to her mounting anxiety, only the hapless Buck is available to mind the children at the last minute.

You might think the whole movie is about the tumultuous relationship between the rebellious Tia and the loveable Buck, and how Tia eventually lets go of her teenage angst and Buck starts to take on responsibility and family.

But as much as we all love Uncle Buck, and we do, I am more interested in what the film has to say about identity. You see, Uncle Buck is all about names and naming. Grappling with this central theme is the star of the film, Percy the Dog. Or is it Parsey? Or Perce? Or Kiddo? Or the dog? Even the Internet cannot agree on his name. In the quotes section, IMDB.com says it is Parsey (but everyone’s name is misspelt or re-spelt in that section), but fan sites say it is Percy, and Uncle Buck himself calls him Perce. So what is it? And what does this all mean?

And in a further twist to this cinematic mystery, our doggy pal is given no credit whatsoever on IMDB. So his identity remains unknown. It is a mystery both inside and outside the film.

So I shall call him Mr Dog. Mr Dog is whatever anybody needs him to be. But what does this mean for his identity? Who is the dog?

Right from the outset, Mr Dog’s identity is a central issue. Tia says to her little sister, “Let the dog out.” At which point Maizy yells, “Paaaarrrrseeeeeey!” And our doggy pal emerges from the dryer. A joke that continues throughout the whole film is that the dryer is broken (Uncle Buck cannot work the dryer and has to microwave the socks instead). The dryer is both the first entry of Mr Dog and a metaphor for identity.

Tia is also tackling the challenges of being an angst-ridden teen and maintaining her integrity amidst peer group and parental pressure. And notably, her boyfriend is called Bug, which I think must be a reference to Kafka. So we have a dog’s viewpoint, a buck’s viewpoint, and a bug’s viewpoint. This has been described in ethology as the Umwelt – every organism has a specific perspective on the same environment. And this film shows us this very concern within the animal behaviour sciences. This film is very deep, let me tell you.

There are two important moments where identities clash and each time, in the background, is a painting of a foxhound. The first is between Tia and her mother, when Tia asks if they will be going to Indianapolis too. And the second is between Tia and Uncle Buck, when she says, “Hurts when someone screws with your life,” making it clear that she was the one who interfered and is the reason his girlfriend, Chanice, thinks he is having an affair. For both these confronting and transformative moments in relationships, a hound, the seeker, bears witness.

But for now, let’s get back to the story. When Buck arrives in the middle of the night he goes to the wrong house and creates such a noise that he wakes up the whole neighbourhood and all the neighbourhood dogs. So when Buck arrives to begin his personal journey, all the dogs bark at this significant moment. And I can attest to the authenticity of the barks, because we all barked back. So this is when you know you are watching high production values.

Buck is then there barely five minutes when he drops a precious plate and breaks it. Mr Dog barks. The plate is merely an ornament, an obstacle to his bond with his sister-in-law, and ultimately it is just an object. And Mr Dog marks this moment with a bark. 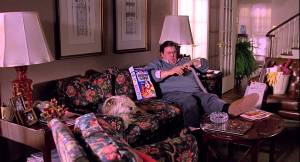 Later we see Buck watching television with Mr Dog. Buck is eating Frosty Flakes cereal out of the box, and then turns on the vacuum cleaner to vacuum up the crumbs that are all over himself. Mr Dog whimpers at this point. His despair at Buck’s disrespect for himself, and his hasty use of a vacuum cleaner, is all too clear.

Then Buck and Mr Dog fall asleep on the sofa together. Mr Dog is on his back, head on Buck’s chest, and Buck gives him a scratch on his belly, to which Buck (not Mr Dog) starts shadow kicking his leg. Empathy connects us. We know at this point that Buck is “becoming dog” and his empathy will win through the day with the difficult teenager, Tia.

In another scene, Maizy and Buck are running through alternatives, although it is not clear why. What about “the dog”? What about Miles? Finally it is revealed that Maizy wants to sleep in Buck’s bed. And then, later that night, we see Maizy and Miles and Mr Dog all in bed with Uncle Buck, who ends up with no blanket and eventually falls on the floor. First Mr Dog wakes up and jumps off the bed and climbs on top of Buck, then Maizy, then Miles, and then they all get back into the bed. This is a beautiful dramatisation of the understanding and empathy between Mr Dog, Buck, and the two youngest children, all to the tune of Mr Sandman.

And speaking of Mr Sandman, Buck is called to the Assistant Principal’s office to discuss his six-year old niece. The Assistant Principal says that the problem is that Maizy is a twiddler, a dreamer, a silly heart. Buck rises to her defence, saying he doesn’t want to meet a six-year old who isn’t a silly heart. This scene shows that imagination is the key to seeing things from someone else’s perspective. And Uncle Buck knows that being a silly heart is the key to learning and understanding!

When Buck thinks he can never win Chanice back, he pours his heart and his beer out for Mr Dog. Buck talks about how people used to tell him how good his life was, no strings, no commitments, but then he realised that maybe it wasn’t so good. And he then calls Mr Dog by the name, Kiddo, and offers him a pretzel with his beer. Mr Dog is kin.

And by the end of the movie’s journey, so is Uncle Buck. 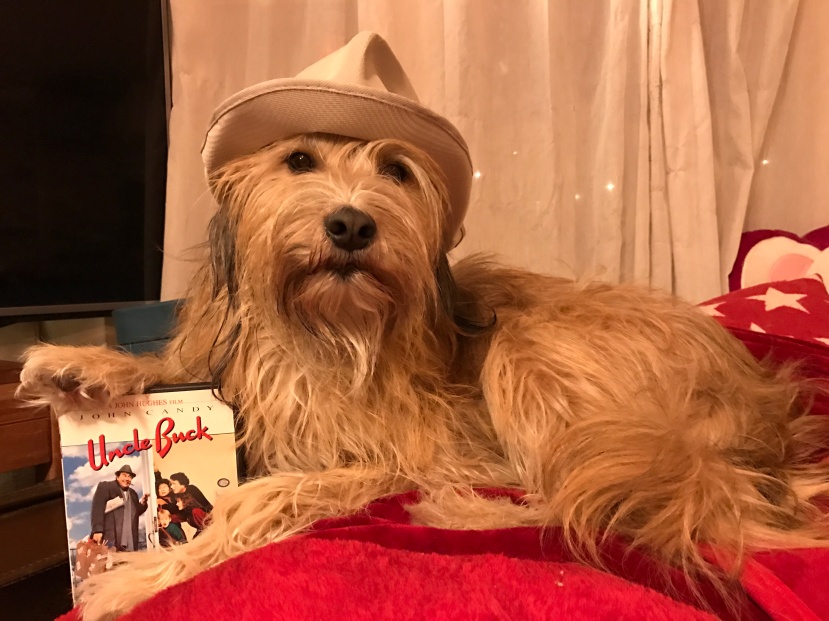