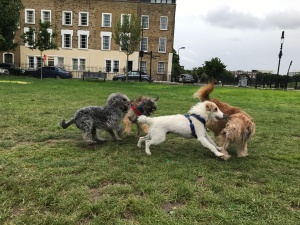 But did you know that play is actually one of the most important indicators of good welfare?[1] And if your dog isn’t playing with other dogs, there might be some things you need to think about and change.

Of course there are some dogs that are fearful, or nervous around other dogs, or around people. But in fact the best way to improve that dog’s wellbeing is slow and carefully managed interaction with other dogs outside their immediate circle. Social learning is a very important thing. And social play is often described as emotional contagion. So that means for dogs that have been treated badly, dogs who may have forgotten how to have fun, play helps them put that fun back into their behavioural repertoire. Social play is how we learn to listen to others. 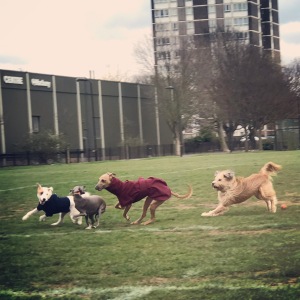 And that other weird thing, that humans think that if their dog isn’t playing with other dogs that this means that their dog has all their attention on them, that can actually be a worrying sign. In fact, the opposite might be true. Because the better a dog’s relationship with their human, the more likely they are to play with other dogs. It’s the same with humans. The better their family life, the more they are able to socialize happily and willingly with others. Unfortunately, a lot of people seem to think we should be more like robots. And the “good behaviour” they so desire is sometimes even an indication that something is very wrong. Sometimes you see those “well-behaved” robot dogs, walking behind their human, head down, hunched over, not looking at anything, not doing anything. Those poor dogs often make me worry most of all.

And one of the biggest problems for healthy dog behaviour and good welfare is that human-dog relationship and training methods. Because the use of aversive training methods, shock collars, prong collars, anti-bark collars, and everything in between has been shown to result in less play behaviour, which is a clear indication of negative welfare. And if that isn’t enough, aversive methods and punishment, shock collars, and invisible fencing and the like, all have been shown to have a negative effect on physical health as well. They cause a measurable increase in cortisol (the stress hormone) and their use has been linked to immune problems, gastrointestinal problems, pancreatitis, and even a shortened life span![2] Why these things are still being promoted as “training” is beyond me. Because regular use of aversive methods is actually a physical as well as a mental health hazard. And it might be behind a dog’s unhealthy social isolation from play.

Play is a huge part of a dog’s social life. And I mean social play. Not sitting in a corner chasing a ball back and forth. I mean running and tugging and bowing and somersaulting and everything else in between. Play is an important part of a human’s social life too. So why do some humans get so worried when we play? Why do they take everything so literally? Look at mounting and humping behaviour. This is a normal part of play, it is not always about wanting to take a relationship to the next level. But it seems to offend humans so spectacularly. And did you know that dogs who engage in mounting behaviour during play are often the most playful dogs in the group!? 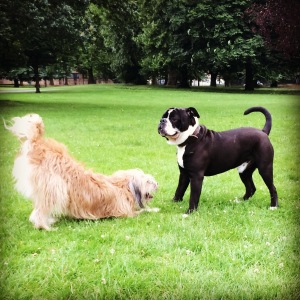 And play is also an important part of how we dogs establish our sense of justice and morality.[3] It’s where we act honestly and according to shared language and rules. To play we need to trust each other. And playing well means we learn to trust. We want to play fairly because we want to keep playing! In fact, whenever we dogs play with each other, we are giving each other feedback as we go. We use play bows to start play and to apologise if we get too rough.[4] Social play with other dogs is a huge part of helping any dog get some useful, social feedback on how good it is to be a dog, and how good that dog is at being a dog!

In fact, there are lots of important things that come from social play. It is a hugely important part of the way dogs socialize with each other. We don’t do it via social media or at a distance (our eyesight isn’t that good anyway). We do it through sniffing and zoomies and bows and smiles. And social play is also an important part of our mental health. We don’t just play to win, we play to learn! Play literally rewires any dog’s brain.[5] So just imagine how important that is for a dog that is coming back from bad experiences! You see, social play with each other is an important part of how we learn to cope. Whenever we get together with our doggy pals we are not just exercising, we are learning important social life skills![6] 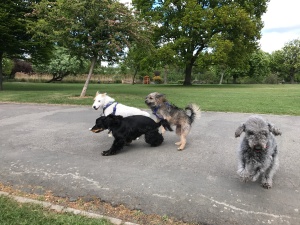 And one of the really important aspects of this learning is the fact that play is fairly unpredictable. Maybe this is what makes humans nervous sometimes. Sometimes they read something altogether different into what we are saying. And sometimes they panic if we fall over, or open our mouths wide, or bark. But in fact, it is so valuable for us to get in and have a go. Because the more we play, the more we deal with the unexpected in a zoomies run, the more we bounce and roll, and the more we are able to deal with the unexpected in other parts of our lives.

Play is all about social interactions. And that’s why play with others outside our family, outside our immediate social circle, is the key to a healthy and happy life. Humans and dogs alike … we need to play together to build our social capital, our bonds and relationships, our social lives, our community. A society that plays together, stays together.

So let us play. Our welfare depends on it! 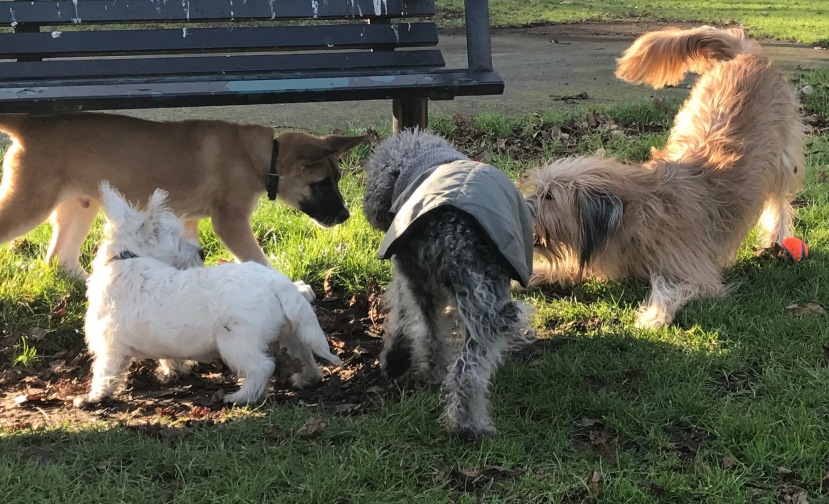 [6] McMillan FD, The psychobiology of social pain: Evidence for a neurocognitive overlap with physical pain and welfare implications for social animals with special attention to the domestic dog. Physiology & Behavior 167 (2016) 154-171.