Huw Le Lytle answers all your questions in his column of wit and wisdom, For the Asking!

Whether you have a question about romance, the dog park, the latest toys, or even exploring space …

Q: Dear Huw, it is said that the first commercial passenger space flights will be happening in the next year or two. Would you like to take a trip into space? It could be the ultimate in zoomies! – Mister Dzhimbo – UK

A: Dear Mister Dzhimbo, thank you for your very topical question. In fact, we have been getting a few questions about space and space travel, including for Write on Cue, so this is clearly a hot topic.

Of course, dogs are no strangers to space travel. The first Russian cosmonauts were dogs. What I find really amazing is that the Russians apparently thought that dogs were the best candidates for the first space flights because they thought that dogs could cope with keeping still for so long. Dogs? Keeping still? Surely they were confusing us with cats? And even when Belka and Strelka took with them a rabbit, 42 mice, 2 rats, flies, some house plants (I guess they wanted the space ship to look nice) and some fungi, they still didn’t take any cats. Yet another mystery in the history of space travel, I suppose.

But when it comes to commercial passenger space flights, my first question would be whether there is a plan to land anywhere. Personally, I am not sure riding in a space ship would fulfill me when it comes to zoomies. It would be a bit like the train to Brighton. It’s fast (usually) but I can’t open the window. And to be honest, I don’t much care for trains either. When I ride on a train I like to limit all my movement to sleeping in Human’s lap, waiting for it all to be over. Actually, thinking about it, maybe this is what the Russians had in mind when they thought dogs wouldn’t move.

That said, usually the destination more than makes up for the ignominy of riding the train, or riding in a car, or riding in the tube, or riding in a taxi, or being carried … basically I abhor all sorts of alternatives to using my own legs. Unless of course the path is covered in twigs and leaves, in which case I am like a Southern Rail train, and I cease all movement due to leaves on the track until I am rescued by one of my engineers.

But back to the question of destination, this is where I become less convinced that I would have any interest in space ships. As far as I can tell, the plan is just to fly around. There is no plan to land anywhere. Not even in Australia! Not even on the moon, and as I have heard it is made of cheese, I am even more bewildered by this one. So this means that the entire experience is exactly the part that I will myself to sleep through. There is absolutely no opportunity for actual zoomies, just being propelled about. I cannot begin to understand humans sometimes.

And how do we know that these people spending tens of millions to do these flights aren’t actually just inside a fancy chamber being shown some movies? Because I’ve heard they can’t even crack a window for those great breezes (which is the best part of the car or taxi, I have to say). Actually, if it is all just a movie that would be great, because these people sound like super-rich idiots who deserve some trickery from their travel agents.

Pondering the side effects

And don’t get me started on the side effects of spaceflight (assuming they are actually leaving the ground, that is). One of these is excess flatulence! Can you imagine that? Especially if we are all on our way back from a couple of days spent on the moon … and all its cheese.

I have also noticed that the companies that are peddling this curious product have called it a few different things, but they have moved away from branding it with the term “tourism”. Even though that’s what it is. When it comes to tourism, I’m with Plato, it’s “rather too common”. And I do worry that humans might take all their problems from Earth and inflict them on the poor locals, as they pillage their landscape for souvenirs of the things they didn’t see while they were there because they were too busy taking selfies with their backs to the landscape.

Of course, “tourist” is now a derogatory term and people call themselves “travellers” instead, as though they are intrepid explorers. But I say let’s call a spade a spade and accept that the space invaders are really just looking for that fabulous Facebook update. Do these “explorers” really want to learn about space? Or just get an amazing selfie? 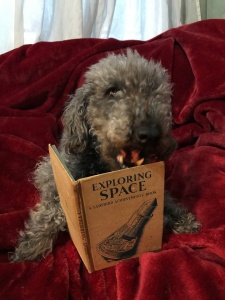 So, I suppose my answer is no, I don’t think I would want to go on a “personal spaceflight”. It seems to be no more than the ultimate narcissistic selfie for the super-rich. It’s a waste of money and a waste of space! I can think of much better uses for all that money. Like making a new Police Academy movie. Now that I would go to see!

If you would like your questions answered by Huw, please send them to woof@bethatdog.com or use the form below. He’s Huw for the asking!

Categories: For the Asking

Tagged as: For the Asking