What does Britain’s favourite TV-viewing Parson Russell Terrier think of Small is Beautiful, Minimalism, Glamorgan Coastal Lives, A Dog’s Life, and Homes Under The Hammer? 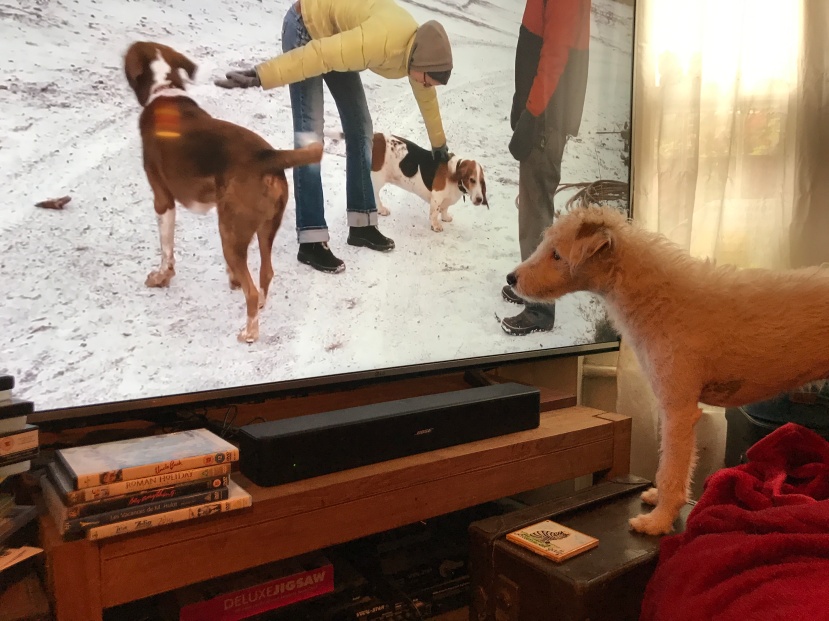 I have been really getting into documentaries this week. I’ve watched quite a few, including this one on tiny houses. I was watching it ironically I think. Because I don’t think there’s any way we are fitting all of us into a tiny house. But it was very interesting. It was all about people moving into tiny houses that are so small they can fit their whole home on a car trailer. 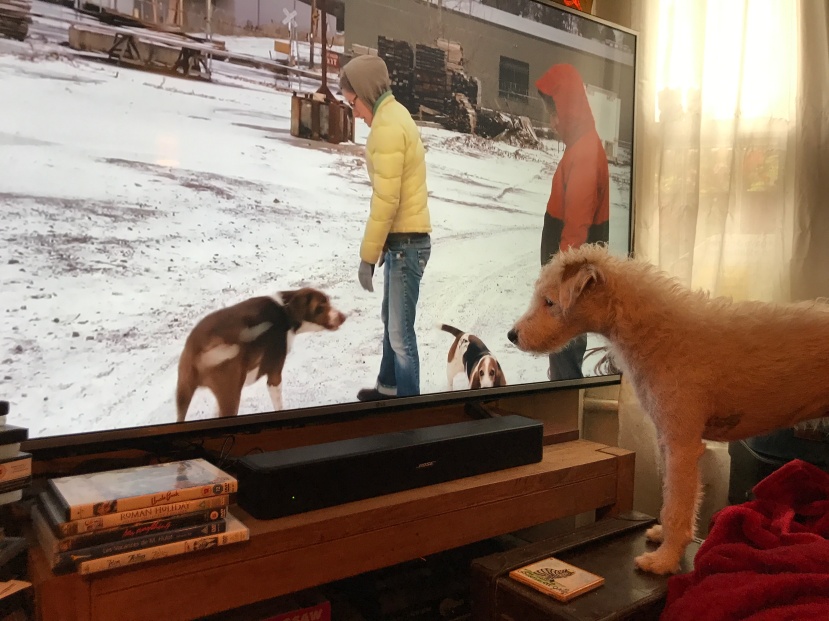 One of the tiny house couples (as in couples who live in a tiny house, not house couples who are tiny), Nikki and Mitchell, had two dogs and a cat. They had some arguments and tension during the building process. It wasn’t going too well, and in fact they still hadn’t finished building by the end of the documentary. But what was interesting was that Mitchell said that because they lived with two dogs, they had to be careful about their arguments. Mitchell said that one of the dogs was a stray they had rescued and Mitchell noticed that he would get especially upset when the humans argued (or were even just having a heated conversation) and he would cower and even go away and hide. Mitchell said this was an important reminder of where they were emotionally. So they had to watch their arguments, for the love of their dogs. I thought Mitchell was very nice for thinking of that. 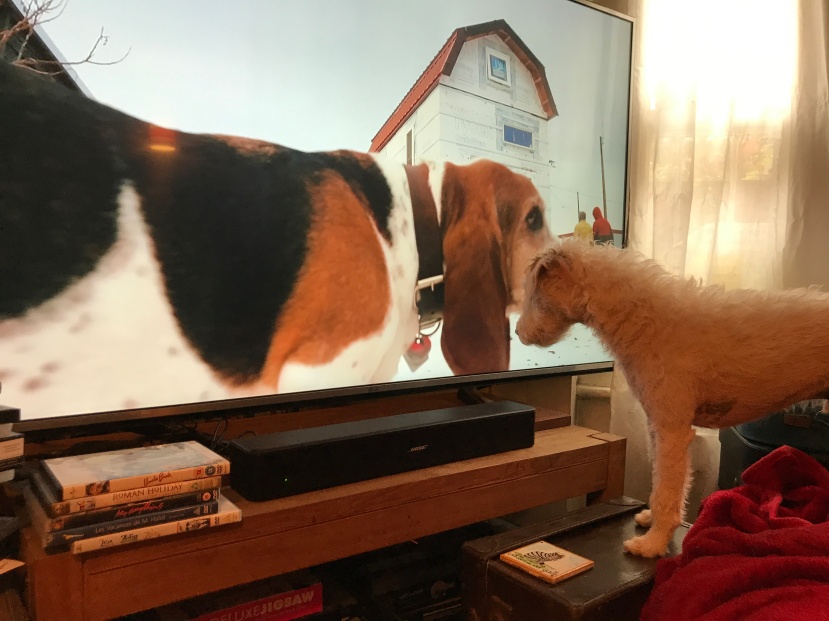 Overall, I enjoyed this documentary very much because I liked the tiny houses and the storage solutions, and I really liked the dogs. 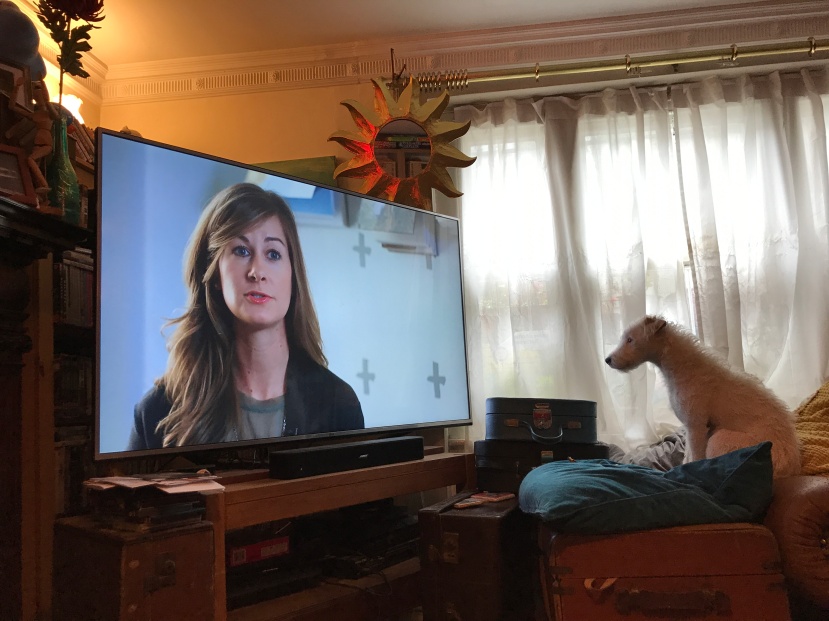 Minimalism … I had to concentrate

Because of my interest in tiny houses, Netflix decided I should also watch a documentary on minimalism. What I took away from this is that none of the minimalists had dogs. And so we cannot become minimalists. But the music was nice and we saw some good bookshops (because minimalists go on tour). 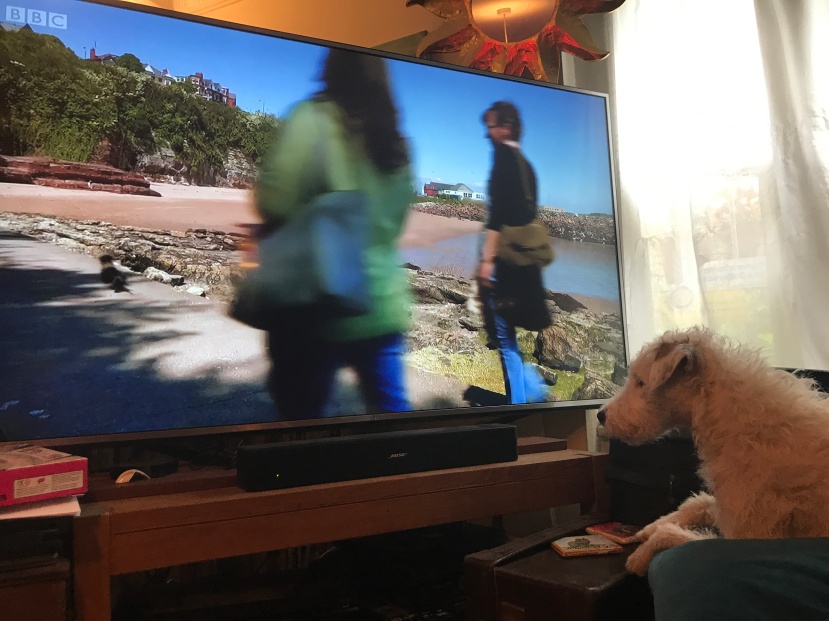 One of my fab friends is Seth the Dachshund (of Seth Bows, he’s an entrepreneurial Dachshund). And two of my fab pals (and Seth’s business partners), Boris Bear and Kia, were in Episode 2 of Glamorgan Coastal Lives!

They were doing a big dog walk with their pals, Barney and Rosie, and hundreds of other dogs who look just like Seth! 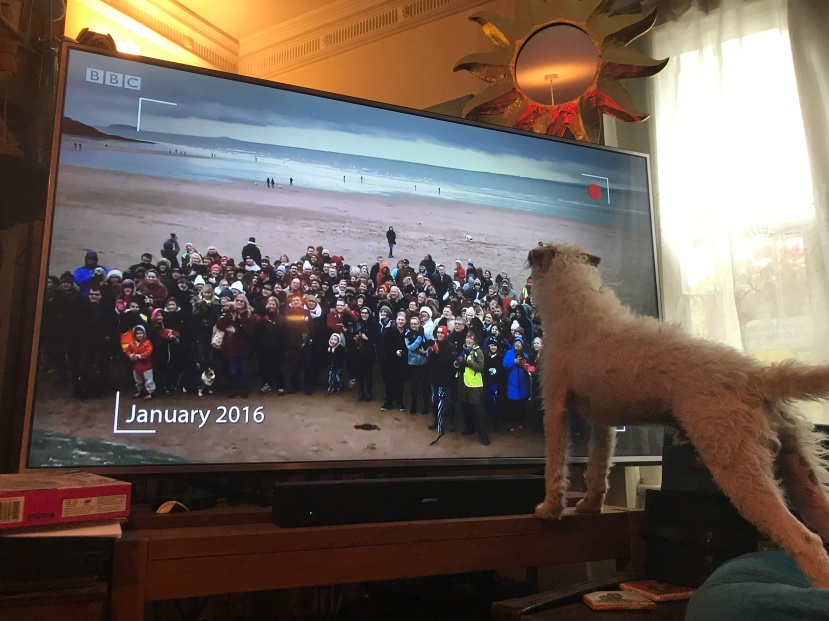 I would love to do something like that, but I need to find a Dachshund costume I think, because I am pretty sure they would spot me as the odd one out. Although maybe I could just hang out with my beautiful pal, Kia! 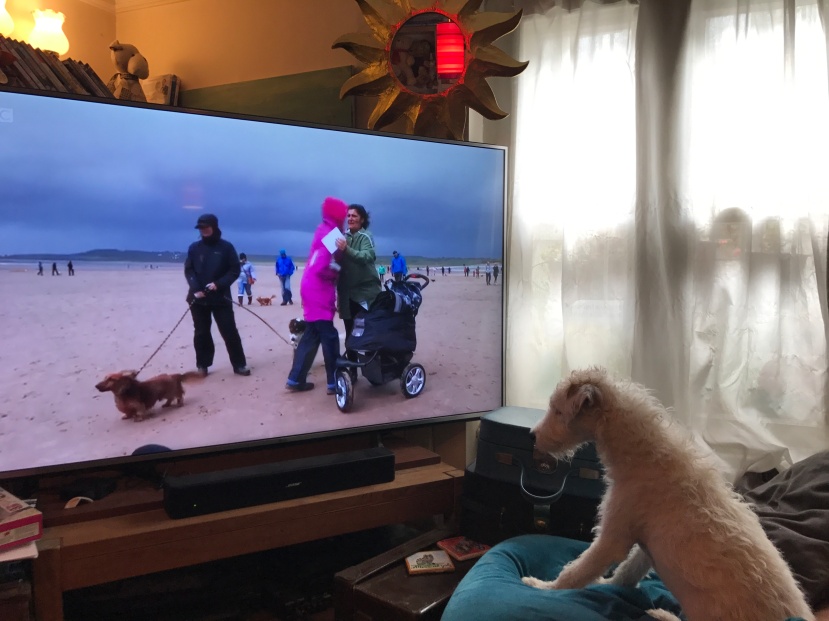 The show also featured two West Highland White Terriers who live with Andy and Peter who had just won the first award for outstanding citizens of Penarth. They run a cafe, which had other dogs in it as well (so I think it was dog-friendly) and Andy’s mum was very lovely.

But especially exciting was one of the very first scenes where there were some people fishing on the rocks. They had two Bedlington Terriers! Fantastic!

We enjoyed this show very much, and obviously Wales is the dog-friendly centre of the universe and we want to visit very soon! 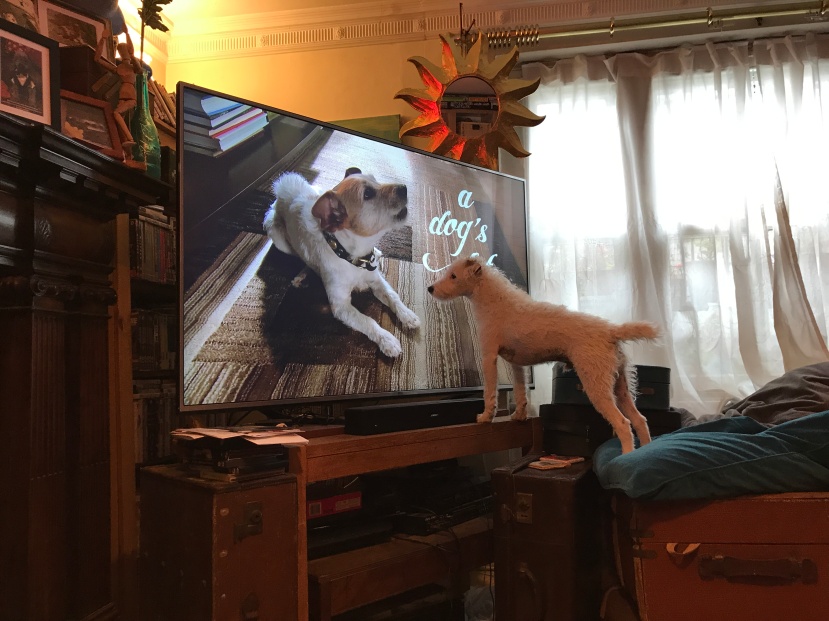 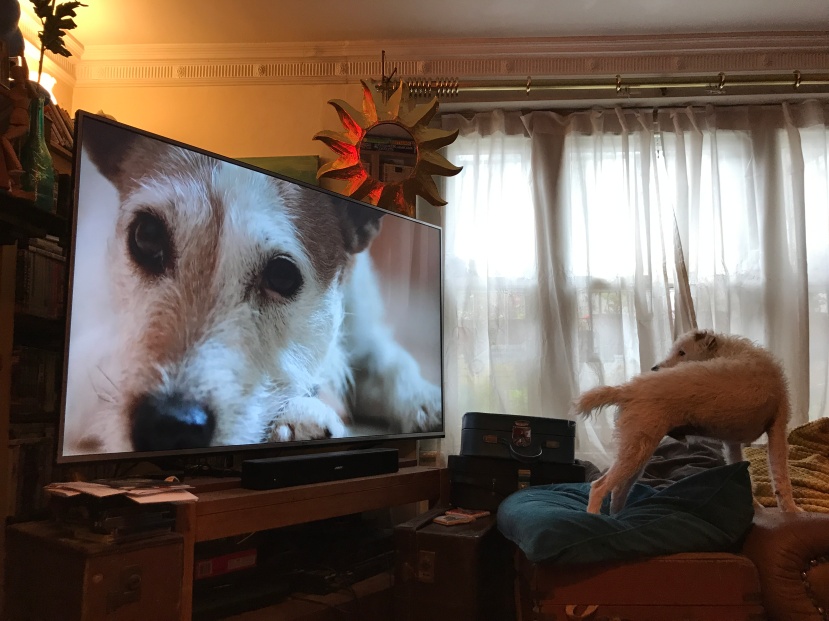 The documentary featured interviews and the research of all the big international stars of dog cognition. It even talked about television for dogs! And it showed some of the latest and greatest research that is happening at all the dog cognition labs throughout the US and Canada, and the revolutionary Family Dog Project in Hungary (which was one of the places that really turned all the attention on dog cognition in the beginning).

And they talked about how there is a lot of bad advice out there about dog behaviour and this is spread in training myths and popular culture, including the nonsense pack theory, which they said wasn’t even accurate when it comes to talking about wolves, let alone dogs. Of course. And they talked about how this leads to silly ideas like people not letting  their dog walk in front of them, or even sillier ideas like not letting the dogs on the furniture. You see, it really was an excellent documentary, it even covered letting dogs on the furniture. 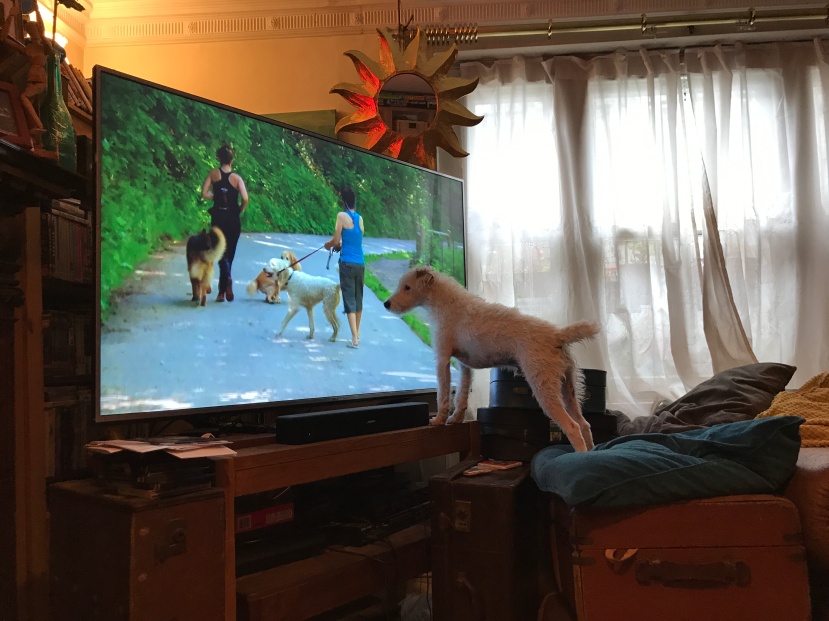 And the bit I really enjoyed was all about how dogs play. So we saw lots of research into park life and park politics! The scientists watched dogs playing and talked about all the different postures, from play bows to mounting behaviour to chase (aka zoomies). And again, the scientists explained that it is a bit inaccurate describing a lot of these things as “dominance” and “submission” because that’s not what is going on at all. Mounting behaviour is a great example of this. It’s not about blue movies and it’s not about “dominance” – it is of course one of the highest levels of play behaviour! 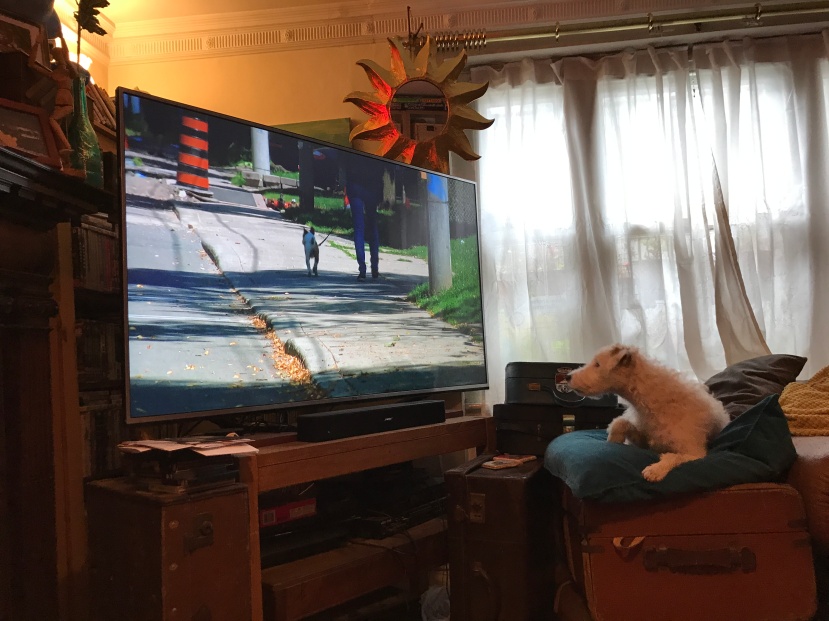 Daisy and her human … I have a little crush

I thought this documentary was great. And I might watch it again so I can watch the zoomies.

Homes Under The Hammer 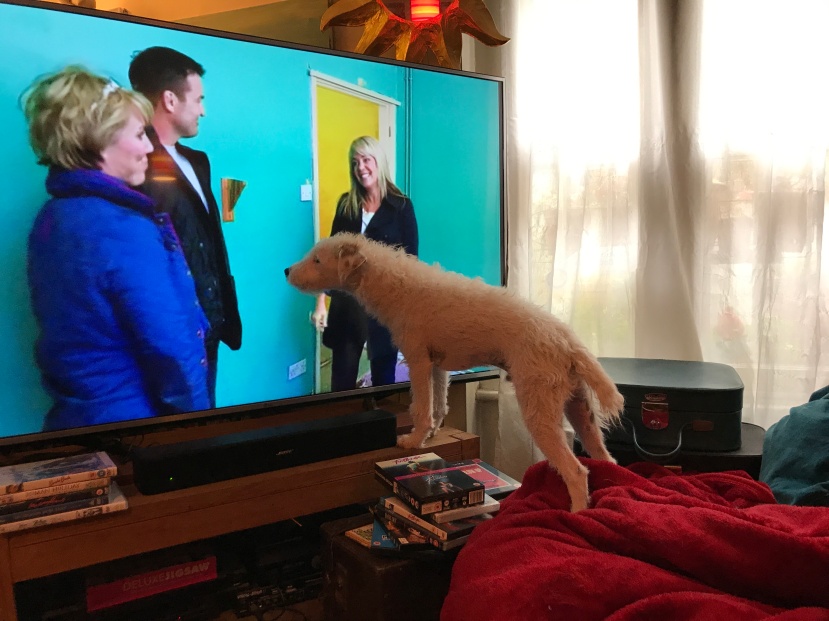 Homes Under The Hammer – the Jack Russell Terrier appreciation society

This week I watched Homes Under The Hammer again and this was a very touching episode. A family went to the auction and bought a house to renovate and sell. But the reason they wanted to bid on this particular house was that their daughter had spotted a neighbour walking a Jack Russell Terrier and said, if they have a Jack Russell, it must be a good sign and a great neighbourhood!