This week I watched a show called Monkey Life. But it’s not just about monkeys. There are chimpanzees, orangutans, and gibbons as well. It is all based on life in the world’s largest primate rescue centre, Monkey World Ape Rescue Centre, in Dorset in the UK. It’s a pretty amazing place. They rescue all over the world from zoos and the pet trade and research facilities and theme parks and more.

In this episode, one of the trainers was teaching some chimpanzees to present their hands and feet. Training helps them to be more relaxed for doing everyday things, like when the doctor visits. The trainer was using a clicker (just like ours!). I listened and I sat nicely. But not once did he give me a treat. 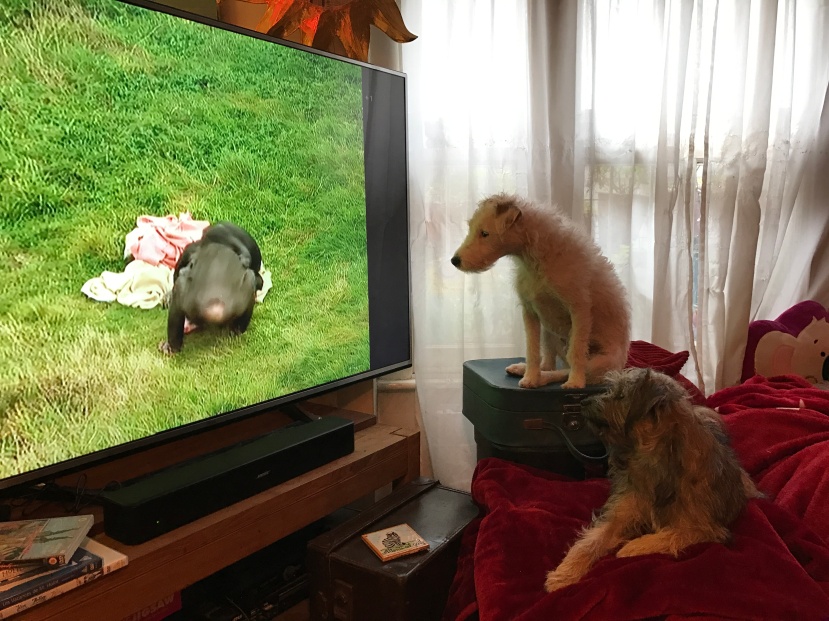 But soon the action turned to blankies. And all the chimpanzees went running around the field playing with their blankies.

This was a lot of fun, because it is exactly what Jeff and I do when we are running around with all the soft furnishings! Jeff watched it with me and we agreed that we liked this programme very much. And we could relate to so much of the action! I look forward to watching it again. 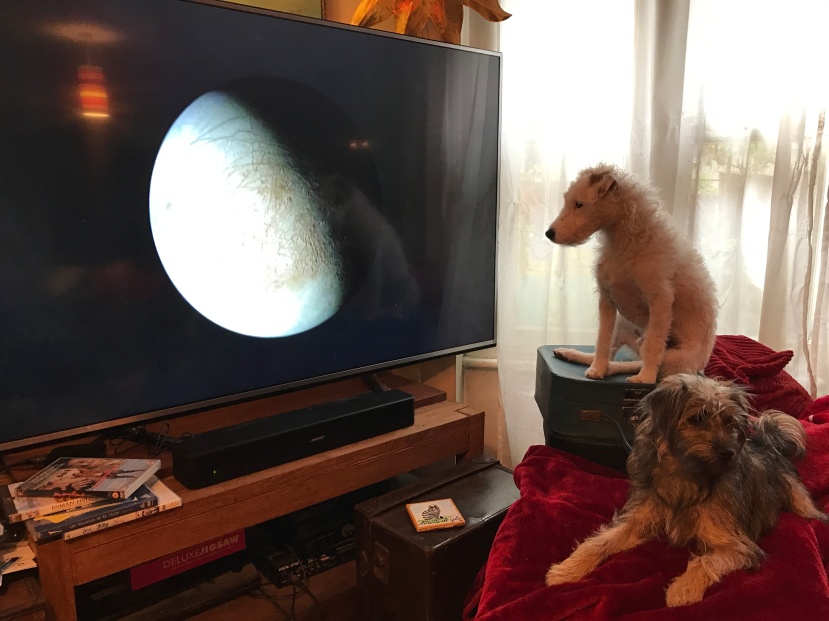 This week I also watched a show about whether there is intelligent life on any other planets. In other words, are there are any dog parks on those sparkles in the sky? One of the signs that the scientists were quite excited about was finding organic molecules on other planets.

I can definitely understand why they were excited. Jeff in particular gets quite excited when he finds organic matter in the park. Fortunately, like the scientists, he usually takes a scientific approach. He sniffs, he investigates, and then he runs off for more zoomies. But some of our other pals usually try out the organic matter and its suitability for supporting life forms, such as their own life form, and they lie down in it. 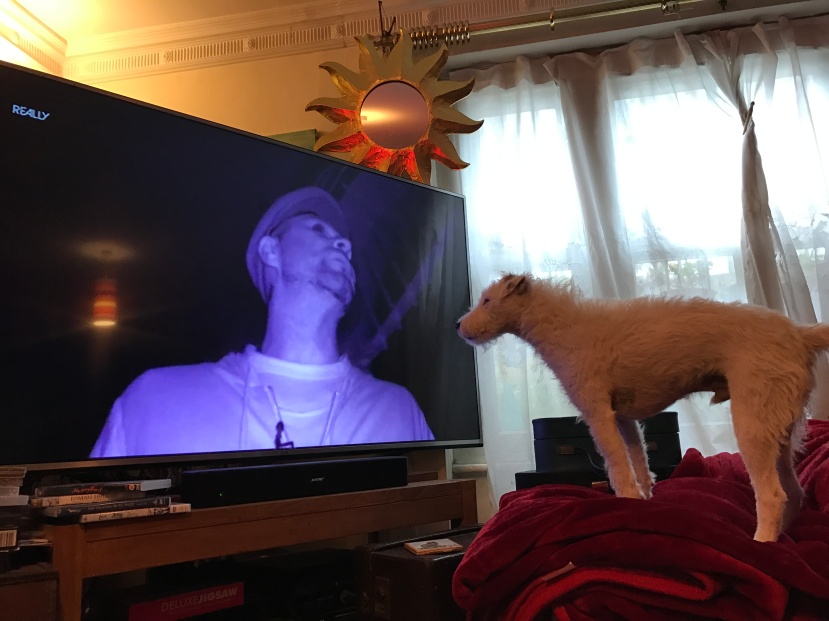 Haunting: Australia – the spookiest thing was the presenter

I then tried to scare myself by watching Haunting: Australia. This episode was set in Old Geelong Gaol in Victoria. The episode in fact was not very scary. But it did make me think about how unhappy a dog must feel if it is left in a crate for hours on end. And if you don’t believe me, just ask one of the ghosts. Or maybe ask the psychic medium, who kept saying they ghosts were very angry at having spent so much time in crates, and then the psychic medium ran away from an empty room full of a camera crew. The show really left me with only one question – why are two psychic mediums not called two psychic media?

Daily Politics – Jeff was just not that into it

This week I watched Andrew Neil on Daily Politics. I thought his dog might be on the show but unfortunately that was not the case. It seems Miss Molly never does the daytime show, only the late night show. So I may have to watch This Week instead from now on. But in the meantime, I still got some entertainment growling at a statue behind the politician who was being interviewed in Birmingham.

The statue kept staring at us

And I also learnt all about Snoopy and his Charter.

I got very excited about watching an episode of A Farm Life. The show is about a farm in Hampshire, England, and stars Sweep the sheepdog. 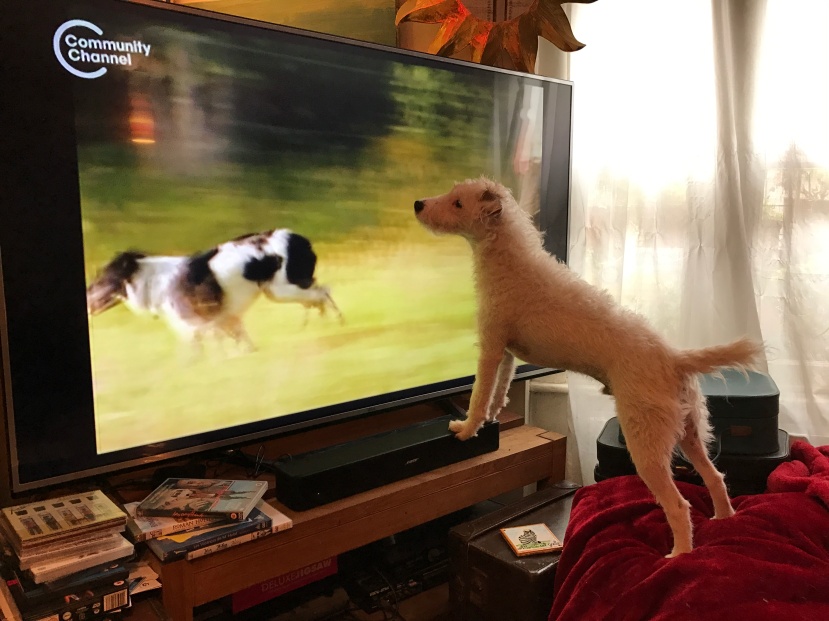 Sweep – the star of A Farm Life

Sweep is trying to overcome some confidence issues, and the show is all about his personal journey as he works on his career as a sheepdog (and there are some farming side stories too). In this episode, George, who is Sweep’s human, took Sweep for a walk with a small group of quiet ewes and some orphan lambs, hoping this time might help build his confidence.

The lambs were very cute and playful

I thought Sweep did an amazing job. And his human was lovely and kind.

Sweep, getting some cuddles after a job well done!

So this really was a feel good show and I can’t wait to watch it again.

And this week I watched a show called Shed and Buried. It’s all about sheds and the treasures buried in them.

You may not know this, but Human loves sheds. On any train journey, most of the oohing and ahhhing is about the lovely sheds in the countryside. So that is why we already know that there is in fact a whole channel devoted to sheds on the Discovery Channel, called DiscShed.

But what is confusing is that DiscShed seems to have become more about cars and travel. It used to have shows about building sheds, but now it seems to be all about driving cars quickly.

And then there is a channel devoted to travel, called the Travel Channel, which seems to be all about sheds. The Discovery Channel seems to be messing with everyone’s minds. I guess in Shed and Buried they do at least travel around looking at sheds. And they do look at some cars and tractors and bikes in the sheds. But still, I think the link is forced. 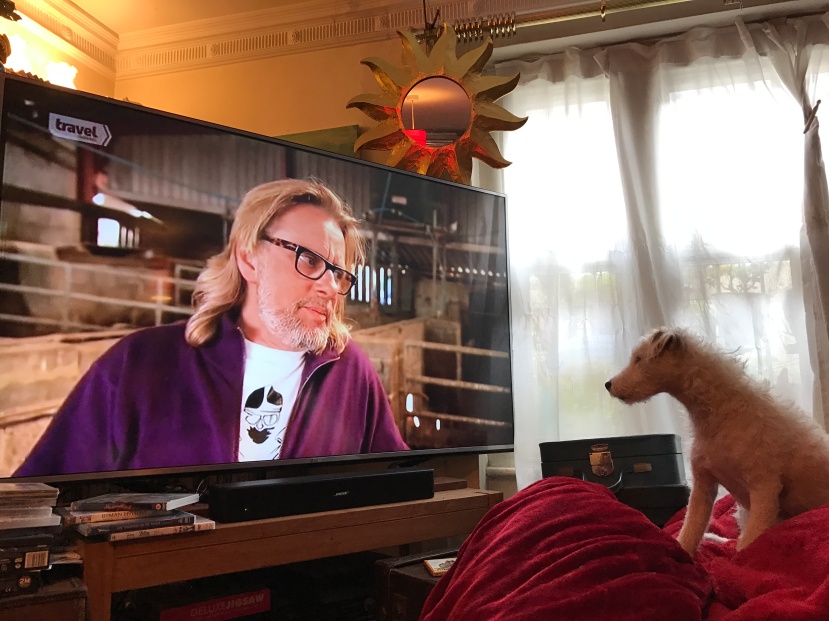 Anyway, in this episode, at first they were in an agricultural shed with some pigs, and the pigs were talking and it was most entertaining. Agricultural sheds are the best because there are usually some animals.

Talking pigs behind the presenters. They were as happy as pigs in a nice shed

But then they left that very lovely shed and went to another shed and looked mostly at cars and bikes and tractors. All they said about the shed was that it was very big. And then they went inside and looked at machinery. We did not get shown around the shed at all.

A tractor is not a shed

I did not think this show provided a very specialist approach to sheds. It offered no technical knowledge of sheds at all. In fact, I didn’t learn anything about sheds. So, my main criticism of this show is that they do not concentrate enough on the sheds.

But the channel itself has potential if it shows lots more shows about sheds.

Leave a Reply to Kajsa's and Cecilia's world. Cancel reply